Our Naja pendants often intrigue our customers, especially those in the English horse riding world or those unfamiliar with the Native American jewelry.

It is pronounced Na-Ja and is the shape of a crescent, as seen through out the history of man on caves walls, coat of armors and flags.  The crescent can be interpreted as many symbols in many cultural. Because of it's association with the moon, it is therefore associated with the alchemy symbol of silver.

The 17th century Navajo Indians, hammered these crescents out to adorn as jewelry.  In the Native American culture it is a symbol of the the spiritual aspects of femininity, such as intuition, creativity and wisdom.

With the arrival of the Spanish, came the Moorish symbols seen as a horse bridle ornament, to ward off the evil eye for horse and rider. Native American adopted the crescent as a horse headstall.The hands seen on some Najas is the "hands of Fatima", known in Moorish history.

Stones began being added after the 1880's.

Najas are the main focal point of the Squash Blossom necklace.

Our Naja pendants change frequently as no two are alike.  We encourage you to contact us for photos of recent ones or see them on our site here. 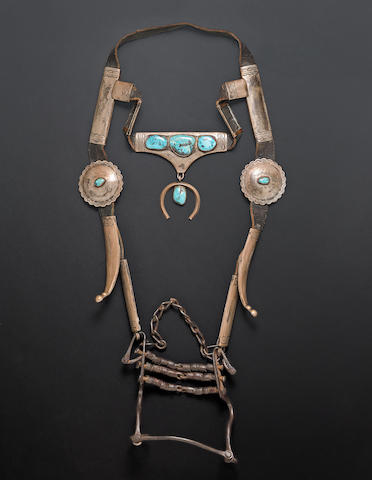